When I first met Dr. Leonard Horowitz in 2009, we did not realize how his work as an expert in exposing the dangers of vaccines and my desire to expose child sex trafficking and pedophilia were so intertwined.
Not until Dr. Horowitz and I were attacked by a “cell” of shadow government operatives, that we refer to as COINTELPRO, did we realize that the protection racket that is protecting pedophiles at the highest levels of power, are also connected to the propagandists who infiltrated the truth movement. These propagandists pretend to be activists but they discredit themselves in their attempts to discredit real activists like us.
We exposed these “truth movement” propagandists here:

The mainstream media plays the biggest part in their mind control persuasion tactics. A good example is their propaganda rag, Salon which is constantly writing stories to discredit anti-vaxxers, even attacking President Elect Trump for expressing his feelings about vaccines, but they also give pedophiles a voice, while remaining biased against anything that could potentially harm the pockets.

Coined by Dr. Horowitz as the “Military-Medical-Petro-Pharmaceutical-Banking cartel” these genocidalists control the media including any alternative media with a voice, no matter how much in opposition against the “globalists,” this media appears to be. Their agenda is depopulation via genocide. This is how the highest levels maintain control by also controlling the opposition too.

This is why Dr. Horowitz, Jenny and I, have been targeted because they do not and cannot control us, and cannot prevent us from speaking the truth.

The key is for people to do their own research and not believe anything until they come to their own conclusions. Once people start investigating on their own, they will be able to connect the dots.

I thank Jenny for her beautiful heart and her bravery in continuing to shine light on the truth. When Jenny came out in our defense against the vicious attacks against us, she too was viciously attacked as she has clearly documented on her blog. She has endured through so much pain and it has never stopped her desire to educate humanity.

My friend Sherri Kane and I have been chatting on Facebook about the Podesta emails outing the dark world of Pedophilia and Child Trafficking. We have shared a few links and videos with each other and today I told her this.

“Sherri,
I have decided to join reddit to try to help the kids wrap their heads around the idea of cointelpro.
I was just on the #PizzaGate threads and they have only been at this for two weeks, but they are exposing tons of stuff.
Pray for me, I hope I can connect with them.
They are getting tripped up by the videos etc by Ted Gunderson etc…”
As I have read the various threads on Reddit I realized that so much of what has been shared is propaganda by cointelpro paid hacks.
For this reason I decided to join Reddit to help them see through the disinformation campaign.
I started the Reddit thread by sharing Sherris excellent expose that was republished on my blog in 2010.  (I added updates to the post twice and that is why it appears to have been published in 2011.) 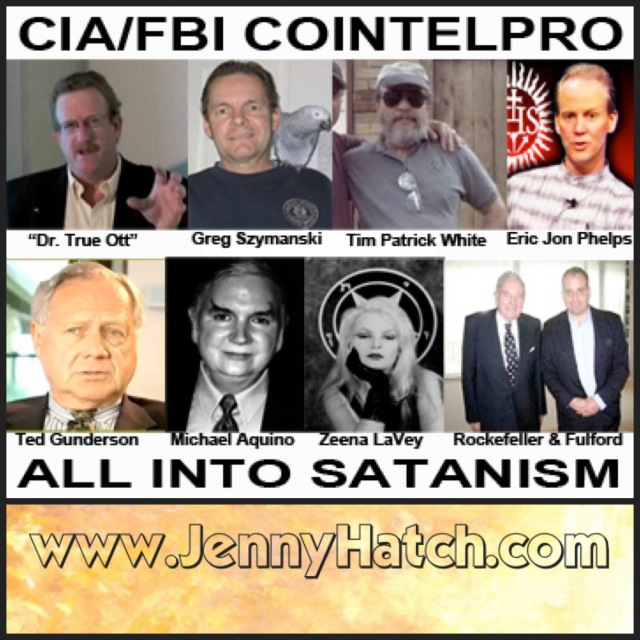 I have been dealing with the blowback for exposing the satanic ring of pedophiles and their internet harpys since 2010.

As I have watched #Pizzagate blow up on Twitter and Reddit these past few days, I have found myself weeping with the passion and concern all of you have been expressing to expose the truth.
I don’t know how to use reddit, just joined, but I believe my story and my insights might be helpful as we all move foreward.
One of the strategies used by the elites minions on the web is to use a mix it all up strategy of confusion and cointelpro trained agents to confuse truth seekers.
Because I have seen videos and links from people like Ted Gunderson and others who are known to have played this roll, I thought it might be helpful if I shared my story.

Take it for what it is.

You may think I am here to confuse and troll. I am not. I am shaking as I type wondering what sort of hellscape will be unleashed on my family for me speaking out again.

We will also see how quickly this thread gets pulled.

CHECK BACK FOR ADDITIONAL INSIGHTS AND INFORMATION THAT WILL BE SHARED BELOW. ALSO, PLEASE USE THE COMMENTS BELOW TO SHARE WHAT YOU HAVE FOUND IN CASE THE REDDIT THREAD GETS PULLED.

“And the rebellious shall be pierced with much sorrow; for their iniquities shall be spoken upon the housetops, and their secret acts shall be revealed.”

22 “And whatsoever nation shall uphold such secret combinations, to get power and gain, until they shall spread over the nation, behold, they shall be destroyed; for the Lord will not suffer that the blood of his saints, which shall be shed by them, shall always cry unto him from the ground for vengeance upon them and yet he avenge them not.”
25 “For it cometh to pass that whoso buildeth it up seeketh to overthrow the freedom of all lands, nations, and countries; and it bringeth to pass the destruction of all people, for it is built up by the devil, who is the father of all lies; even that same liar who beguiled our first parents, yea, even that same liar who hath caused man to commit murder from the beginning; who hath hardened the hearts of men that they have murdered the prophets, and stoned them, and cast them out from the beginning.”
26 “Wherefore, I, Moroni, am commanded to write these things that evil may be done away, and that the time may come that Satan may have no power upon the hearts of the children of men, but that they may be persuaded to do good continually, that they may come unto the fountain of all righteousness and be saved.”

The secret acts are being SHOUTED FROM THE HOUSETOPS!
KEEP SHOUTING!

And as a final question for all truth seekers.

How many satanic pedophiles did Ted Gunderson lock up during his career as the top “expert” in the FBI?

His job was to travel around the country putting out fires, deflecting media attention, stealing investigations from local police, and reassuring parents he was “all over it” when in fact he did NOTHING.
If parents made too much noise or journalists came too close to the truth they were quietly dispatched through a variety of techniques including murder.
These stories need and deserve to be told.
Ted is burning in hell as I type, but many who were a part of this cabal of evil still need to be brought to justice, especially the politicians.
I feel like I should add to this thread the final plea from Len and Sherris article, if only to emphasize the point that most of the materials available on the internet about Satanism and Pedophilia exposure have been placed there by the evil doers.
Much of the information from so called survivors is riddled with insanity that makes the average reader turn away confused.
Many of the videos and books written to expose and bring to justice were written by fake journalists and the real investigators were murdered or intimidated.
Len Horowitz whole you tube channel was pulled, various sites hacked, and google has scrubbed his and Sherris work off the search engines.
I kept waiting for someone on Reddit to find his work and start reporting, but everyone kept pointing to the cointelpro fakery and that is why I decided to join last night.
We can expose these people and save many children.
Keep posting proof of the scrubbing of web sites and social media by the pedos.
As new information comes to light keep pointing to it, fearlessly shining the sanitizing effect of sunlight in dark places and remember… THE HOBBITS WON!
We will win too! The Scriptures assure us who the winners are in these last days.

Here is Len and Sherris plea from the article reposted on my blog:

“This COINTELPRO war of evil against good features spiritual suppression through disinformation. This war on the mass mind enslaves humanity through fear and confusion.
In conclusion, the Wiki companies facilitate COINTELPRO operations by generating a highly biased free-for-all of confusing and discrediting propaganda.
This “Hegelian dialectic” manipulation method generates mass confusion by mixing polar opposites; truths versus lies. This manner of “mixing-it-all” up leaves truth-seekers overwhelmed, confused, and psycho-socially disabled to discern anything, or choose what’s best for self or society.
Thus, the objectives of COINTELPRO are achieved, exclusively benefiting the controllers at the expense of the controlled.
All readers are urged to protest these crimes against humanity, especially for the sake of our children. Protect children by keeping their faces out of school year books until the current injustices and satanic influences over government and law enforcement cited herein are stopped.
Boycott Wikipedia and the Wiki-Company. Search the Internet for alternative sources of information.

Post this urgent alert on websites, and mail it to your friends and networks.”

May this evil be exposed perfectly in Gods way…legally, with liberty and justice for all.

Early this year my face broke out in a horrifying way. I have had a toxic weaponized nasty goo moving through my system since April.

I have zero proof of being poisoned, but with the untimely death of my dog Samwise last Christmas Eve, the infection breaking out (my son Ben also suffered with a whole body rash during many months of this year), and the fact that the disease continues to fester in my face even today, I HIGHLY SUSPECT we were poisoned once again. 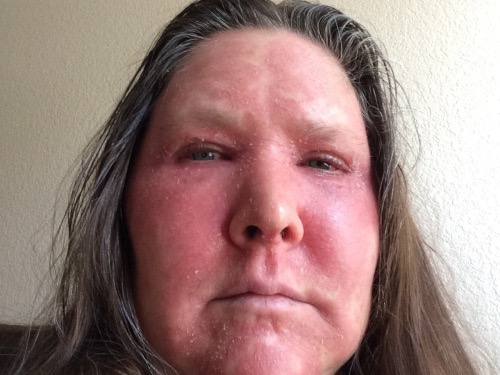 WHAT TRIGGERED THE INVESTIGATION OF FBI/CIA AGENT TED GUNDERSON BY SHERRI KANE AND DR. LEONARD HOROWITZ?